“Tateyama Kurobe” covers all the eastern part of the Toyama prefecture and Toyama Bay and includes the Northern Japan Alps at a height of more than 3,000 metres and Toyama Bay beyond a depth of 1,000 metres. Rivers flow from mountains to the sea steeply forming vast alluvial fans.

The area with more than a 4,000 metre difference between the top and sea bed in tens of kilometers of distance is unusual and the history for 3,800 million years is carved on the Earth.

Snow piles up in the Northern Japan Alps, the great river which flows through an alluvial fan and Toyama Bay, where groundwater flows. Water links Tateyama Kurobe while changing the shape. Various animals and plants survive on this water circulation, and this unique culture has flourished over time.

Tateyama Kurobe Geopark is composed of high mountains, big rivers and deep sea.You can see amazing biodiversity and unique culture, which can be called Earth inheritance.

History of 3,800 million years in the Earth

Tateyama Kurobe reflects the history of the Earth and provides evidence that continents have repeatedly collided and divided since 3,800 million years ago. Dinosaurs were stalking and ammonites were swimming in the sea when Tateyama Kurobe was a part of the continent.
After that, Tateyama Kurobe started separating from the continent and the Sea of Japan started spreading. Consequently, Tateyama Kurobe moved to the present location and Japanese islands were formed.
Moreover, the Northern Japan Alps were rising rapidly and forming the present mountains, rivers and sea. When you visit Tateyama Kurobe, you can experience a 3,800-million-year-long history on a global scale. 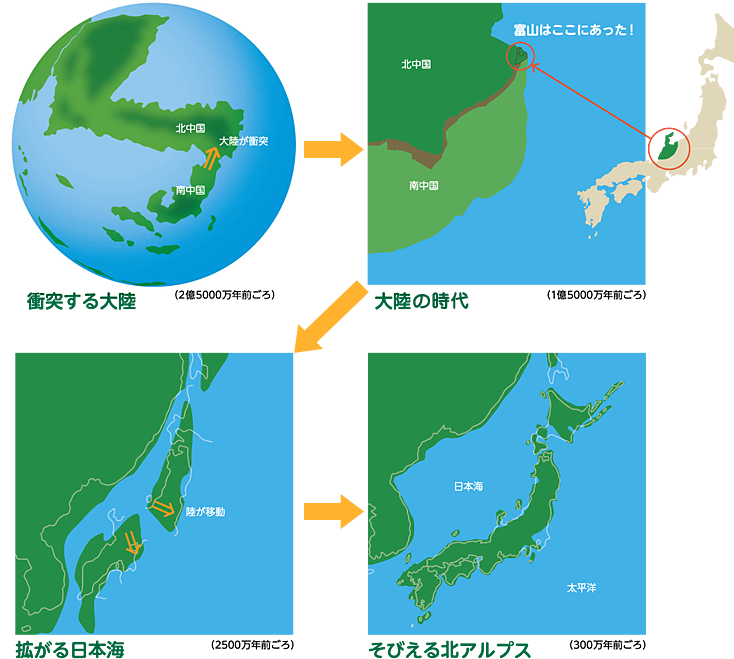 The Northern Japan Alps, including the Tateyama Range in the Tateyama Kurobe Geosite, are above 3,000 meters in elevation. Cirques curved by glacier are left along the ridges and v-shaped valley, such as the Kurobe Gorge, can be seen under them. Sediments have formed alluvial fans and continue to flow into the sea.
Toyama Bay deepens sharply to a depth of more than 1,000 meters in approximately 20 kilometers. It is one of three major deep bays in Japan. The 750-kilometer-long deep valley in Toyama Bay reaches to the middle of the Sea of Japan.
You can feel dynamic space facing Toyama Bay with the Northern Japan Alps behind you. 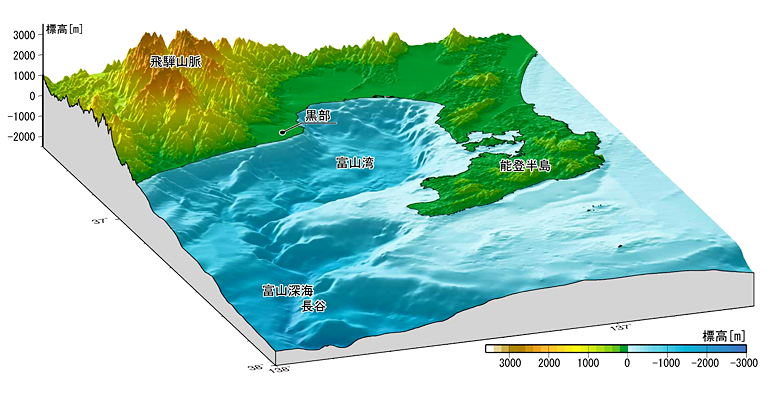 The area of heavy snowfall 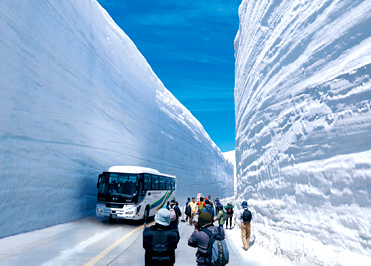 Every winter, snow fall at the Valley of Snow near Murodo (elevation, approximately 2,400 meters) reaches approximately 20 meters high. The Eurasian Continent, the Sea of Japan and the Northern Japan Alps make the exceptional heavy snowfall at Tateyama Kurobe in the world. Most surprisingly, all of this snowfall melts in the summer, the benefits are experienced downstream. Despite the seasonal melt, glaciers remain at Mt. Tateyama and Mt. Tsurugidake.
Let’s imagine why it snows heavily here watching the snow wall. 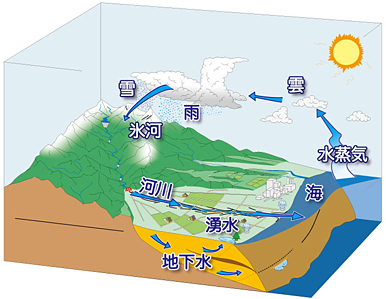 The annual amount of rain and snow at Mt. Tateyama is approximately 6,000 millimeters. Water carves mountains into deep valleys. Alluvial fans have been formed downstream by massive sediment.
A part of plenty water flows under the ground and springs at the end of fans to make waterfront.
Fresh and cold groundwater is one of factors to make submerged forest and buried forest adding to main factor that is sea level change caused by climate change on the earth.
Water conveys nutrients to the sea to support the various creatures, including fish, that live in Toyama’s “nature fish preserve.”
You can observe that firefly squids that usually live in the deep sea are lighting up the seashore for spawning in the spring night.
You can experience water circulation’s effect on spring water here and there.

Diversity of nature and unique culture 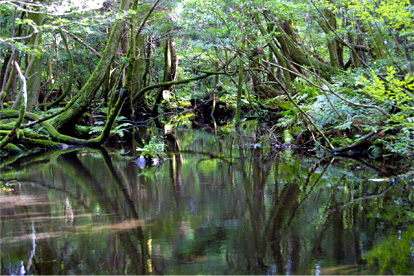 Tateyama Kurobe Geopark has an incredibly long geological history of over 3,800 million years; in addition, it spans more than 4,000 meters of elevation and exhibits various geological and topographical features. It contains rich biodiversity from the top of the mountain, down to the waterfront and into the deep sea.
The history, culture, lives and industry of humans in this region have been affected by geological features.
Its people have come to know that these features are strongly related to mountain worship, tourism in the valley, electric power development, the aluminium industry, water control, rice field development, the transportation network, local festivals and fisheries.
In Tateyama Kurobe Geopark, several excellent opportunities to learn new lessons and make new discoveries can be availed by observing the mountains, rivers, sea and the creatures that live there as well as by experiencing its history and culture.
As its residents, let us share our experiences and love for the region so that we may hand down our pride to the upcoming generations.